How to Play the College Admissions Game: Trends in 2018

This year 20.7 million students are expected to attend college--5 million more since 2000. Yet acceptance rates have drastically fallen. Some schools only accepted 5% of 2018 applicants. Do you know what college admissions officers will look for this year?

Every spring “Where did you get into school?” can be heard whispered across cafeteria tables and echoing down high school halls across America. No generation has been spared the anxiety-producing college application process and with each year the hurdles for acceptance get higher.

The recent average acceptance rate to college is 66%, slightly up from previous years, but so too are the number of students applying to college. In fall 2018, some 20.7 million students are expected to attend American colleges and universities, constituting an increase of more than 5 million since fall 2000.

According to the most recent study by the National Association for College Admission Counseling total GPA, grades in college prep classes, and strength of curriculum are still the most important factors for admissions officers when considering college applications, but there are several new trends emerging, and if your child is starting to look at schools, you’ll want to know what admissions officers are looking for in the coming year.

Should I Apply Early Decision? It’s Become More Important Than Ever Before

Do I want to go to a college or a university? In state or out-of-state? A private school or public? We know there are many, many choices to make when it comes to where your child will spend the next four years, but one thing is for certain: making these decisions early and deciding on a first-choice school sooner rather than later will give your child a serious edge. According to U.S. News among the 216 ranked colleges that reported both their early and regular acceptance rates the average early acceptance rate was 67.6% -- 16.4 percentage points higher than the average regular acceptance rate of 51.2%. 187 schools out of the 216 ranked colleges had a higher early acceptance rate than regular admissions. While it might be challenging to decide on one school so early in the process there can be definite advantages. In this blog the pluses and minuses are explored.

Admission Rates Continue to Fall—And Not Just at Top Schools

Applications to ivy league schools, top colleges, and public universities are on the rise and that means acceptance rates are dropping. Schools are aggressively searching out top applicants and shifting affordability is opening doors for many more students. As this chart illustrates, acceptance rates at Harvard have steadily declined since 2010. 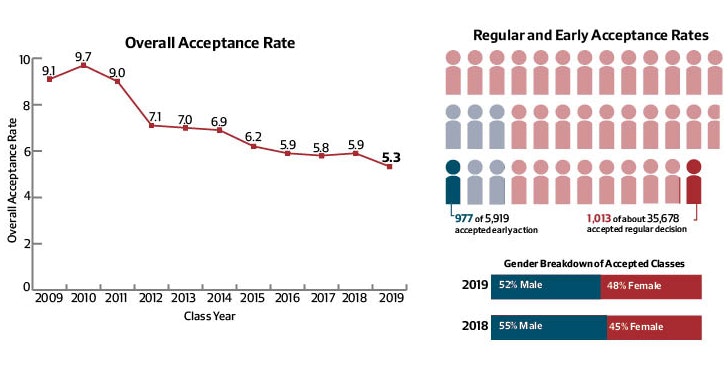 A record-low 5.3 percent of applicants were offered admission to Harvard College’s Class of 2019
Credit: The Harvard Crimson, “Harvard Acceptance Rate Will Continue to Drop, Experts Say”

Stanford University topped the 2018 list of schools with the lowest acceptance rates—they took only 5% of the 42,497 students who applied. U.S. News and World Reports provides a list of the schools with the lowest acceptance rates. You might be surprised to see many schools on the list are more selective not because they are considered a “top school” or rank high in academics, but because test scores and GPA are less important to them or they have a test-optional policy, making them attractive to borderline students or as backup schools. Generally speaking it is getting harder, not easier to get into college, and that means giving your child an academic advantage is imperative.

Test-Optional Schools Are on the Rise

The number of schools adopting a test-optional or test-flexible policy for applications are on the rise—especially among small liberal arts colleges. When applying to these schools you can submit SAT or ACT scores if you’d like, but they aren’t required. Instead these colleges look at the whole picture, taking grades, curriculum, essays, and school activities into account. “The past four years – since the redesigned SAT was introduced – have seen the fastest growth ever of schools dropping ACT/SAT mandates,” explained FairTest Public Education Director Bob Schaeffer. “More than 100 colleges and universities reduced standardized exam requirements in that period. That’s a pace of one every two weeks.” Here is a list of test optional schools as of winter 2018.

While some schools are supporting students who walk out of classrooms, a number of schools are rescinding or denying students acceptance for protesting recent events. Admissions officers are Googling applicants and checking social media for contradictory information, racist comments, political or religious views, or photos they feel raise eyebrows. The 74 reports, “Each year, Alpher surveys more than 350 admissions officers on their approach to students’ social media output. In this year’s poll, 35 percent said they checked personal accounts; one-quarter of those said they did “often” in order to make admissions decisions. Those numbers have climbed persistently over the 10 years the poll has been conducted”.

Don’t shy away from social media though—it’s also a great place for your child to post about their accomplishments, volunteer work, or include videos that highlight their talents. Make social media work for your child, not against. If there’s anything questionable err on the side of caution and take it down.

In the movie Legally Blonde, Elle Woods, includes a clever video essay with her application and against all odds wins acceptance to Harvard. What’s an amusing moment in the movie has become a real trend. Many colleges even have apps that allow students to create and submit videos and other content when applying to their programs. For example, Goucher still accepts the common application, but the school also provides the option to submit the Goucher Video App. More than 200 universities accept ZeeMee, another app that lets students include a video and pictures with their college applications. And then there’s Scholly, a scholarship search tool that’s become popular.

Diversity is Changing and Leading to More Openings for Domestic Students 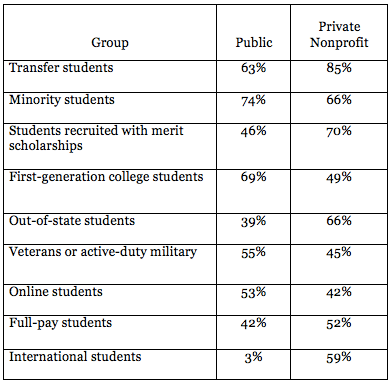 From Inside Higher Ed

Asking About Disciplinary Records Is Going Away at Some Colleges

As you can imagine this final point is a controversial one, but there is a growing call to “ban the box” from the admissions process. The movement argues that many minority students face greater difficulty with law enforcement and might have been treated unfairly. They feel questions about disciplinary records discourage them from applying to college. So far large public university systems like New York State’s SUNY schools and some private colleges have banned the box, but in July 2017 Louisiana became the first state to ban public colleges from asking questions regarding disciplinary actions during the admissions process.

Demographics, new policies, funding, changes in testing, and various other factors cause the college admission landscape to shift constantly, but one thing is for sure: finding the secret to setting your child apart from the crowd will always make applying to college easier.

Are you going through the college admissions process and have a story to tell or a tip to share? We’d love to hear from you in the comments below!